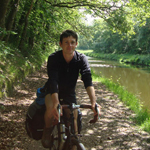 In the surf, the back-roads and the hill-tops. All around Leitrim and Sligo on a surf board or a bike.

Not a lot of people know this

I almost drowned in a Fulacht Fiadh when I was 8. I slipped on a wet log and fell in. The worst part was wearing another kid’s jacket around my waist to replace my wet trousers.

I’m from Roscommon, studied in Galway and lived and worked everywhere from Canada to South Korea, but was always drawn back to the west of Ireland. I have worked as a rickshaw driver, bike courier, cherry-picker, teacher and media officer, but I have finally found my true calling running adventure vacations at Wilderness Ireland. I’m an avid cyclist, mountain biker and surfer but I also love exploring Ireland’s lesser known regions on foot. While I work in the office most of the time, I get out to guide a few of my favourite trips each year!

“I’m an avid cyclist, mountain biker and surfer but I also love exploring Ireland’s lesser known regions on foot. While I work in the office most of the time, I get out to guide a few of my favourite trips each year!”

I’ve been with Wilderness Ireland since 2015, and though I mainly work in the office managing trip operations, biking is my true calling so I enjoy getting out to explore the backcountry of Ireland and share this with as many people as possible!

I’ve always been drawn to travel by bike. In fact, some years ago, I travelled the length of western France with my wife – by bike-packing! We packed up everything we’d need to our bikes and set off on a journey that ranged from hills to canals to ocean to villages, sampling the best of France’s bread, cheese and wine along the way! I learned a good bit about France as well as became a pro at servicing my own bike. What an incredible experience!

On the other side of the world, I spending a year as an English teacher in South Korea – a very different experience than biking across France! Based in the massive city of Seoul, I received a huge culture shock when I arrived, though I’m convinced that a year skateboarding around Seoul and Korea changed my perspective and outlook on life.

In a more traditional sense, I’ve also travelled around many of Europe’s wild regions as well as visits to Canada and the west coast of America.

You can probably tell already, but I’m an avid road cyclist. I also have gotten into mountain biking in the past few years – I love nothing more than getting out on my fatbike to explore the hills of Sligo (my lunchtime routine is mountain biking through the hills!).

Though raised in a landlocked county, after moving to Sligo, I’ve picked up surfing. I think its important to introduce children to the great outdoors at an early age, so with my wife and daughter, we like to set into Ireland’s backcountry to camp and hike – Ireland just has so many beautiful places to discover!

Perhaps due to my time in Seoul, I have an interest in wellness and mindfulness. In fact, I was the one that suggested we combine biking and yoga, designing a Biking & Yoga Escape that encompassed two activities I’m really passionate about.

Living in Leitrim and working in Sligo, I know the hills and mountains northwest of Ireland very well. I’ve biked across the entire County Donegal, and hiked and camped extensively across Connemara and its mountain range, the Twelve Bens.

Though the northwest is probably my favourite, I admit that I have a soft spot for counties Cork and Kerry. The southwest corner of Ireland might be among Ireland’s most popular regions, but I love showing people that even the most travelled regions can still hold their secrets if you know where to look!