The Climate of Ireland

From rain to shine, rainbows, solstices, snow and wind, learn about the climate of Ireland through all 4 seasons.

So what climate can visitors to the Emerald Isle expect when visiting Ireland? Ireland his a temperate climate, meaning that we have fairly mild weather all year round. Though we have four seasons, they are less distinct from each other than in other places, such as east coast of America. Temperature ranges are usually cool, and the range is smaller. A low temperature in Ireland might be -1°C or 0°C (around 30°F) while highs are rarely above 20-22°C (about 70°F).

For reference, other temperate zones throughout the world include: the rest of Europe, most of the US and Canada, New Zealand, Central Asia, the southern part Russia, the northern regions of China, and most of Argentina and Chile.

At the edge of the continent at its high latitude, Ireland acts as a buffer to the UK and northern Europe against the wild Atlantic storms and catching the great winds and waves. This makes for very interesting weather phenomena such as wild skies and dramatic lighting, huge waves (ideal for surfing!), beautiful rainbows, almost never-ending summer days (up to 18 hours of sunlight, perhaps more), amazing sunrises and sunsets, and marvellous summer and winter solstices.

Though we do get a lot of rain, with the northwest getting the highest rainfall (and the southeast getting the lowest), it rarely sticks for long, and usually blows over quickly. In fact we like to say that in Ireland, you often get all four seasons in one day!

Take me straight to:

Blizzards are practically unheard of, and snow is rare, often leaving just an occasional dusting on the ground, and usually only on higher ground and inland. Most of our precipitation comes down as rain rather than snow.

Similarly, in summer, Ireland may experience warm and mild days. Thunderstorms are infrequent, though rain often comes in patches, intermittent with cloudy and wet weather. Though rain often comes and goes, sunny spells come in longer stretches, meaning that we usually get a few sunny days in a row.

Our high latitude means that seasons are shifted a month or so earlier than in the rest of Europe, meaning that on the unofficial spring starts on February 1st, St Brigid’s Day.

Tip: When heading out in the hills, we always recommend that you check the weather forecast for accurate and up-to date-weather information.

Spring is beautiful, quiet and mild. As the days slowly get longer, the emerald countryside is alive with new life, bouncing lambs, adorable puffins and blossoming wildflowers.

Never too hot, summer is home to some of Ireland’s driest months. Enjoy the Summer Solstice, summer festivities, plentiful flora and fauna, and near-endless days. 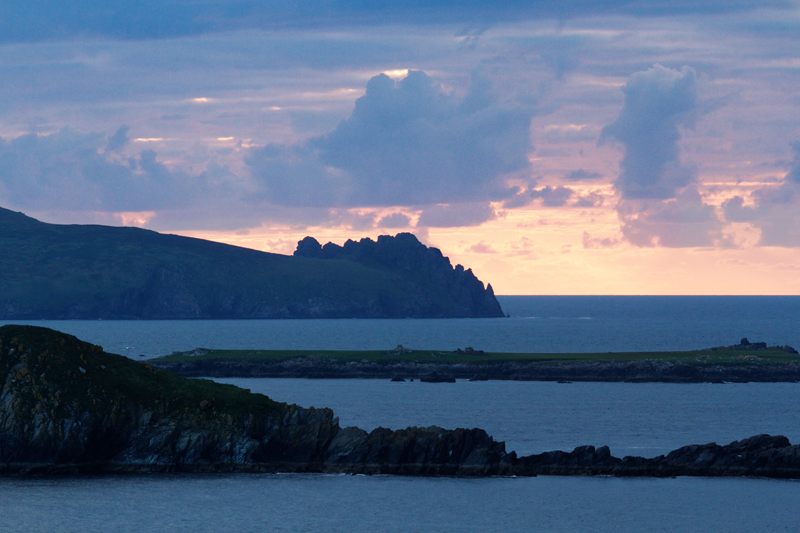 Spring in Ireland is a time of new life, crisp mornings, beautiful sunrises, mild days and of fresh air – some of Europe’s freshest, right off the Atlantic. Expect fairly mild days and soft showers which quickly blow over to pleasant skies, with an average temperature or about 10°C (50°F). Days are lengthening, with May days particularly long and glorious (leading up to the Summer Solstice in June).

Explore our spring landscapes to marvel at the beautiful fields and forests of wildflowers, bouncing newborn lambs, the arrival of the puffins and other native birds, and fresh spring breezes. The end of May marks the start of the tourist season, so a spring trip to Ireland is the perfect balance between good weather and few crowds.

Why Visit Ireland in Spring 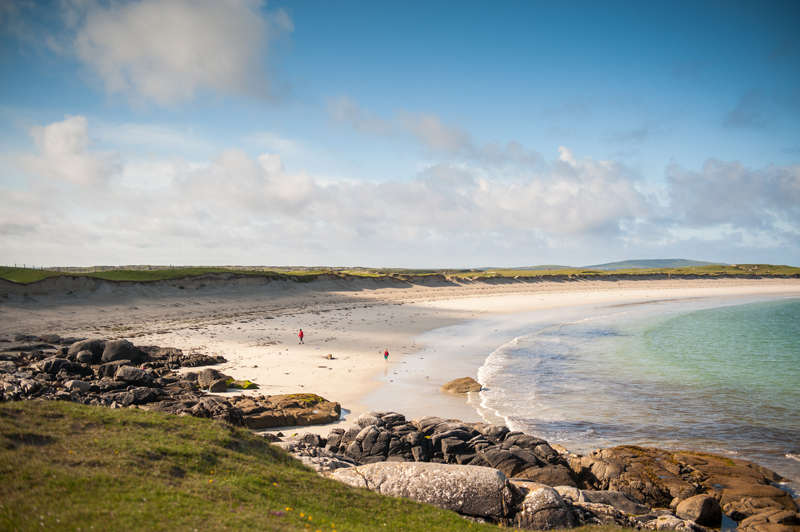 It seems like the sun never sets during Ireland’s summer – and it is very nearly true! Summer days in Ireland have as much as 16-18 hours of daylight, with the rest of the night as twilight. June and July are generally drier, though August can be a bit more wet as it’s the start of the harvest season or autumn on the Gaelic calendar. Average temperatures will be around 16-18°C (60-65°F), with some days in the 20s (high 60s, low 70s °F).

This time of year is great for outdoor lovers. The mild temperatures and longer days make Ireland perfect for activities like hiking, road cycling, and spending time outdoors. The forests and countryside are lush and full of life, the landscape is still in bloom, and the world is full of concerts, picnics, festivals, sporting events, hikers, surfers and cyclists.

Why Visit Ireland in Summer 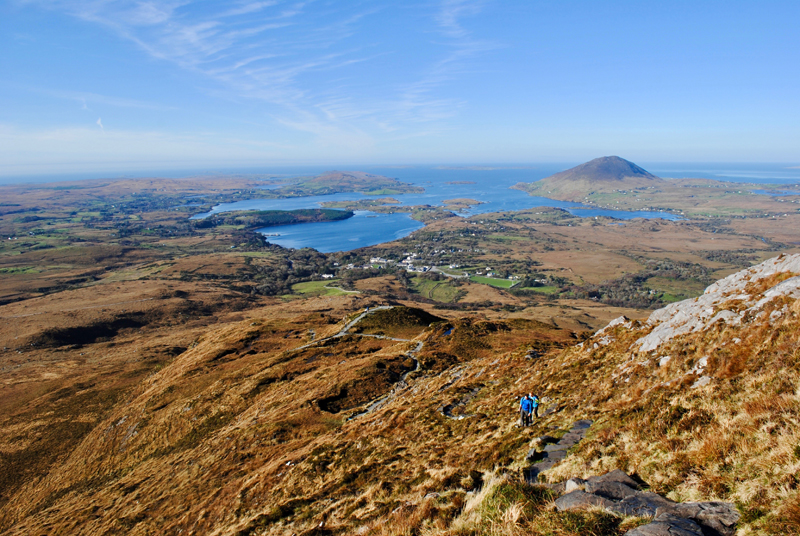 Experience the beauty of Ireland during the autumn months. Generally during autumn, the tourism season is winding down, meaning a less busy time of year to explore the wild landscapes of Ireland, perhaps even getting some of the more popular spots to yourself.

As for weather, autumn is a bit of a wildcard. We usually get a few nice weeks during either September, October and early November, though it’s worth noting that October is statistically the wettest month of the year. But it’s also the month of Halloween, which originates in Ireland, and also when autumn shows it’s true fall colours!

Why Visit Ireland in Autumn 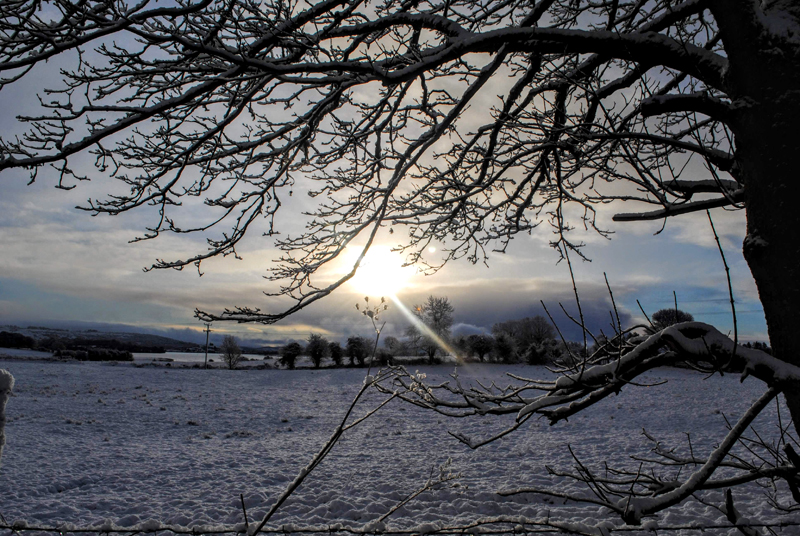 Irish winter is characterised by short days and long nights, which is less bleak than it sounds. Leading up to Christmas, the days are shortening but there’s a festive spirit in the air and plenty of celebrations. Though few tourists, accommodation and food are great value for money. Longer nights means it’s easy to enjoy dramatic sunsets and sunrises without waking up too early.

By day, winter skies are dramatic and by night, the starry skies and moonscapes are vivid. The west coast is battered by winter storms, bringing huge waves. The Winter Solstice marks the start of lengthening days. While January can be quite cold, we sometimes see snow. February marks the start of Gaelic spring, with snowdrops and the tittering of birds appearing on the landscape.

Why Visit Ireland in Winter

What Makes Irish Weather So Special

Everyone knows that Ireland is known for rainbows. But is this just a stereotype? Nope – it’s the truth. In Ireland, we get plenty of rain and low pressure. Combine these two things, and the upside of it is that a lot of rainbows! Rainbows appear when we have the sun behind us and rain before us. Though the rainbow phenomenon is common in spring and autumn, it’s likely you’ll experience at least one rainbow while you’re here – and if you’re lucky, a double rainbow! Learn more.

The Summer and Winter Solstices are the longest and shortest days of the year, respectively, and of course they exist worldwide. But the high latitude of Ireland makes the solstices here more dramatic – the long, endless days where the sun is still lights up the edges sky approaching midnight, and in winter, the short chilly days with gorgeous sunrises and sunsets. It helps too that the ancient Neolithic peoples worshipped astronomy, aligning many of their ancient monuments with the solstices some 5,000 years ago.

The ever-changing skies in Ireland mean the lighting is both dramatic and fleeting. Clouds whip around the sky with the sun shining through, creating a canvas of dramatic light perfect for photography. Autumn is the most vivid. In the winter, it’s storm season, with great, giant waves arriving on Ireland’s shores. So epic are the winter waves that surfers come here from all over the world! In fact, the biggest waved surfed was recorded in Co Sligo, only broken recently.

In most places, when it starts raining, it stays raining. Not so in Ireland. Out weather changes quickly, and often. Sunny spells tend to last longer than rainy ones, with short gusts of rain that blow over quickly. We often joke that we get most seasons every day! This of course makes it ideal for hiking and cycling – the temperature is nearly always mild, the storms rarely stay for long, and the sun will shine at least a bit every day!

Artificial light has both changed and improved our lives – but it also causes light pollution. Since 2001, naturally dark places are under the protection of the International Dark Sky Association. Rural Ireland is ideal for stargazing as we have few weest coast cities – it’s mostly made up of small towns and villages. On a clear night in dark places, marvel at 4,000 twinkling stars, planets such as Venus or Jupiter and even meteor showers and all with the unaided eye!

Yes, this is a nice way of saying that in Ireland, we do get a fair bit of rain. As said before, it’s rare that it rains all day – instead, we get bursts of showers, sun and cloud. The best part of all this rain means that the landscapes are continually beautiful shades of green. Woodlands are lush and mossy, rich with earthy smells. Fields are rolling green hills. Lakes and rivers abound. And of course, there are the wild bogs – put your boots to use to squish through them!

What to Wear When Hiking in Ireland

As always, exploring the wonderful outdoors of Ireland is all about the layers. It’s important to layer up because Ireland’s weather can be so changeable.

When you’re out and about exploring the outdoors, obviously you want to be comfortable. We always say to “start cold” because you’ll warm up as you start going. You’ll want to start with a base layer, and then add layers on top of that as needed, with your outer layer waterproof. It’s always a good idea to have at least 1-2 extra layers in your bag because you never know when the temperature might drop, the rain or fog might settle in, or the wind might pick up.

For example, just today, the morning started off cloudy and very cold. Then there was a mid-morning rain shower, a brilliant rainbow, then clouds and slightly milder temperature, and now the sun is shining and the birds are chirping. Only last week we had a bit of snow.

So, what do you need to bring on your next trip to Ireland? See below for some information when it comes to deciding what to wear when hiking and biking in Ireland.

Read More From the Wilderness Blog

Your Guide to the Mourne Mountains

Our Holidays Reviewed
in Your Own Words

The whole concept of south to north and along the Wild Atlantic Way was excellent. Accommodation was outstanding. Guides and personnel were fabulous. In general I would highly recommend this trip to others provided a few glitches were sorted.

Exceptional Travel Experiences
From our Friends

Specialists in offering a range of vacations, tours and incredible wilderness experiences. Wilderness Scotland take their clients to the most remote and beautiful regions of Scotland, all while staying at the most welcoming accommodations and delivering outstanding customer service.

The ultimate collection of European cycling vacations. BSpoke's cycling experts can tailor-make your perfect cycling vacation where you can travel at your own pace or in a group of like-minded individuals. A BSpoke Tour is all about being as restful or as adventurous as you desire.

Britain's original ski travel agency and tailor-made ski tour operator, Ski Solutions has been arranging ski vacations for over 30 years across Europe and North America. The Ski Solutions team are all skiing experts, and their wealth of knowledge and passion for the mountains will ensure you experience a truly memorable ski vacation.