Travel to Ireland From North America 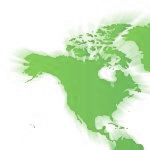 There are a number of airlines that fly directly to Ireland from major North American cities, with new routes being added annually. Most airline websites have a facility that will allow you to book your domestic connections and transatlantic flight on one ticket.

Flights from North America generally land in either Dublin Airport, which has most connections, or Shannon Airport, or Belfast International Airport, so please check the departure point of your trip (which will be one or other of these places) before booking.

Aer Lingus  Ireland’s national airline which operates most flights from the USA and Canada in and out of both Dublin and Shannon, with direct flights to/from:

A number of US and Canadian airlines also operate direct flights to Dublin and/or Shannon, including:

There is also the option of connecting to Ireland through other European airports, using large international airlines such as KLM, Air France, Lufthansa and British Airways.

Tailor made trips generally start from the airport, where you’ll be met by your guide. As for small group tours, these will start at a railway station in the region in which you’re travelling. From your chosen airport, you may take a bus or a train to the rail station start of your trip.

North American travellers may want to spend a few nights pre-trip in Dublin, Belfast or the town where your trip starts. Not sure where to stay? Just ask us! Our friendly team of Adventure Consultants will be more than happy to provide a few recommendations or even build

Our holidays reviewed
in your own words

So glad I took this trip. It was an awesome experience, and the hikes and landscapes were an absolute joy. The Wilderness Ireland team are so nice to work with and go above and beyond to help you with questions, logistics issues, everything really. Will definitely book another trip with them to explore other parts of Ireland

Six expert travel companies. One place for all your adventures.

The ultimate collection of European cycling holidays. BSpoke's cycling experts can tailor-make your perfect cycling holiday where you can travel at your own pace or in a group of like-minded individuals. A BSpoke Tour is all about being as restful or as adventurous as you desire.

Britain's original ski travel agency and tailor-made ski tour operator, Ski Solutions has been arranging ski holidays for over 30 years across Europe and North America. The Ski Solutions team are all skiing experts, and their wealth of knowledge and passion for the mountains will ensure you experience a truly memorable ski holiday.

Wilderness England creates incredible journeys to the wild and magical outdoor spaces across Yorkshire, the Lake District, Northumberland, the Cotswolds and the Peak District. Providing inspiring active experiences, immerse yourself in the unique landscapes, history, culture and wildlife on a Wilderness England adventure.