This trip is operated by our Scotland team. Clicking on the link below will redirect you to the Wilderness Scotland website. 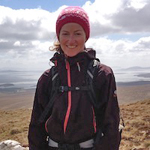 Lough Nakeeroge north of Croaghaun, Achill Island – a hidden treasure of a glacial lake very close to the sea and an isolated sandy beach. It’s a special spot to wild camp alone with nature’s sights and sounds. In general, I love the undiscovered wilds of Mayo and Connemara!

Not a lot of people know this

I used to work for Paul Daniels (the TV magician) in the late 80s.

After living and working in Dublin for nearly twenty years, I escaped the city. In 2009 I moved to Newport, County Mayo to get closer to nature. I completed an honours degree in Outdoor Education and obtained my Mountain Leader Award.

I firmly believe it’s never too late to learn new skills and took up distance running and triathlon in my mid-thirties. I am passionate about the outdoors and love introducing people to the Irish hills. My particular favourites are the wilds of Mayo where I have family roots.

At nighttime, I can often be found stargazing. I have a real interest in this area having researched and written my dissertation on the preservation of the Irish night time skies. I also set up the Mayo Dark Skies campaign to gain International Dark Sky recognition for the Wild Nephin & Ballycroy (which later won a Gold Tier Award in 2016).

I co-founded the original Dublin Ghostbus Tour and having a grown up in a family of magicians, on occasion, I’m also known to interweave a little close-up magic with some storytelling.

I firmly believe it’s never too late to learn new skills and took up distance running and triathlon in my mid-thirties. I am passionate about the outdoors and love introducing people to the Irish hills. My particular favourites are the wilds of Mayo where I have family roots.

Qualifications Read More
Previous Experience Read More
Travel Read More
I was born in London though due to the nature of the family business, I have always been a frequent traveller to Europe and beyond, often with camper van and trailer to magicians festivals and conferences. In more recent years, I’ve done a bit of hiking and climbing in Spain.
Outdoor Activities Read More
Triathlon and Marathon running (although neither in the last 5 years!). I have completed 10 marathons including New York, London, Hamburg, Paris and Vienna marathons, not to mention the Dublin marathon 5 times! I’ve also done a Half Ironman too, but very slowly :-)
Hobbies & Passions Read More
Regions you're expert on Read More

The wilds of County Mayo – in particular, the Nephin Hills and Achill Island.

As stated, Georgia set a gold standard. She set the right hiking pace, adjusted and necessary and made it all look easy.

Georgia was a wonderful guide and I was very lucky to be in a small group meaning Georgia could get to know us better and accommodate all of our wishes. I believe we all got on quite well and it was nice that Georgia joined us for all the meals.

The walks were great and Georgia seemed to know the hidden/less common trails and areas which meant for most of the walks we did not encounter other people which I particularly appreciated. She also had an encyclopedic knowledge of Irish history, wildlife and fauna which she imparted to us during the walks.

Furthermore, kudos to Georgia for her driving skills too manoeuvring the big van winding down the country roads.

Georgia was terrific - one of the best of the many with whom I've traveled. Very knowledgeable on the many subjects about which I asked her. She often remembered things I'd previously asked her, and later pointed out to me some of those things, or clarified information. She had a nice, relaxed way about her and a good sense of humor. She also took the time to connect me with a couple of people in Doolin and on Inis Mor, about whom a good friend, an Irishman, in Colorado for many decades, wanted to know. He is 82 years old, and it is a blessing to him to have news from his old friends. Georgia did not take time from the others in the group, as they were occupied with other things. Tom was also excellent, especially having to jump in after several days. He was very accommodating to our group of women, who, by this time, had developed some differences.

Georgia our guide was prepared and knowledgable on a wide variety of subjects pertaining to the tour as well as Ireland in general. She provided context for the locations we visited and made it more enjoyable. Topics included geography, geology, Gaelic language, history, literature, music, film, food, drink, flora and fauna. We were also lucky to have Liam, new to this company, who was shadowing for 3 days.

Both Georgia and Liem were great.

Georgia managed a demanding group with tact, diplomacy and humour.

Our guides Georgia and Darragh looked after us brilliantly.

Georgia was great on all fronts. She was accommodating, a good driver, a good hiker, and knew the area/culture well.

Superb in every respect.

Georgia was great. She kept everyone engaged and happy. She was flexible in adjusting routes to deal with circumstances - a no show guest, a cancelled ferry! She was able to keep the younger and fitter group going, without making the slower and less fit group feel we were holding anyone back.

Georgina was wonderful! She was always checking in to make sure everyone was okay. She went above and beyond to help me get my bag back after it was delayed at the airport. She was knowledgable, friendly, flexible - all the things you want in a great guide. I'd happily explore more of Ireland with her in the future.

Georgia was friendly and concerned and listened to everyone’s input.
She, I assume, adjusted the walks to our group, as there’s no way this was level 3 if Skye/Hebrides was level 2.

Our guide Georgia has performed the Perfect job !
She has managed the schedule in a total natural and relaxing way for us. She has shared great hikes, and her awsome cultural knowledges about Ireland (really a big big plus for me). She has transformed a great hiking trip in a unique experience. I don't like to compare leaders or anybody (no one is better, we are just different from each others), so I wouldn't say she is the best but she is certainly the most special one I have ever met.

As I said earlier, Georgia was fantastic in every aspect of the job.

Georgia was really knowledge & passionate about Ireland's nature, culture and traditions, as well as a good storyteller.

Georgia was amazing! I loved getting to know her and learn from her vast knowledge of ireland, nature and everything else. She always looked out for us and gave tlc to the group.

Georgia was wonderful, and considering the big shoes she had to fill from our Scotland guide, she was a lovely companion, super accommodating, our teens adored her, and we felt honored that she shared a little bit of her personal family life with us (taking us to a family farm to have tea and see the animals). It was tough to bid her goodbye.

Our Guide, Georgia, was the best ever. She was so knowledgeable and accommodating it made the trip extra special!

Want more Wilderness in your life?

Sign up for our newsletter and be the first to hear about trip news, blogs and offers.