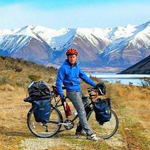 Connemara’s Twelve Bens Mountain Range – especially Benbaun mountain. A great place to take some friends out on a hike.

Not a lot of people know this…

I worked as a film and TV extra to earn money in college. I appeared in Irish television shows such as Fair City and Love/Hate along with larger productions such as Titanic – Blod and Steel mini-series.

Originally from Co. Monaghan, I studied creative digital media at the Dublin Institute of Technology. After graduating, I decided to buy a bicycle and see how far I could cycle. This ended up being a 44,000 km biking journey over the duration of 4 years visiting 35 countries on five continents.

This epic biking trip brought me into contact with many different people and places, and I was always moved by the hospitality and generosity I experienced. After returning from my travels, I’ve moved over to the west coast to live in the colourful and bustling city of Galway. This gives me the opportunity to explore the local mountains of Connemara and beyond, as well as appreciating Irish culture. Ireland has so much to offer and I look forward to sharing this beautiful country with you!

“After graduating, I decided to buy a bicycle and see how far I could cycle. This ended up being a 44,000 km biking journey over the duration of 4 years visiting 35 countries on five continents!”

I’ve been working in the travel industry since 2018 which included several guided cycling trips in the west of Ireland.

From 2013 to 2017, I cycled 44,000 km on  five continents across 34 countries. This included cycling through Europe, the Middle East, SE, Asia, Australia, South America, and North America. I had to carry all of my equipment on my bicycle during the journey! I was very lucky in that I spent the majority of the trip wild camping as well as being welcomed into local peoples homes.

You can read more about my travels on my website, Gone for Milk, which chronicles my round the world adventures.

I enjoy cycling and bike-packing – obviously! I also love to hike and enjoy open water swimming. Currently, I am training for the Killary Ford Open Water Swims. This will be a massive achievement for me seeing that I only learned how to swim in 2017!!

I have a good knowledge of the backcountry and hiking paths in Connemara and the Burren region. I also love the islands along the west coast of Ireland – the Aran Islands are particular favourites of mine!

Oh my gosh! Where do I begin to say how grateful that we were given this two excellent guys.. Both Dean McMenamin & Ruairi Leddy are extremely knowledgeable of both the history, geography and the customs of their great country. They were so accommodating but also challenging us to enable you to get the most out of each day... Dean giving us our roots location and Ruairi our Game of Thrones sites will always remain in our hearts. Would we come back because of them? Without a doubt! Would we recommend your company because of them most certainly! We were saddened to say Good Bye.. But their charm will bring us back to our other home again.....